If you are looking for a healthy vegetarian and vegan soup option, you have got to try this Easy Vegetarian Corn Chowder. It is so easy to make, it is done within about 20 minutes, which includes prep and cooking time!

What Makes This Corn Chowder So Good?

First of all, it uses the best produce summer has to offer. I used tons of fresh corn, zucchini, and so many others. It is the perfect blend of veggies.

It is simple to make. All you do is prep the veggies, boil for about 10-15 minutes, blend some up, add in the milk, and serve.

Not only is this a vegetarian chowder, but I also made it a dairy-free and vegan corn chowder as well. I resisted the urge to use heavy cream and went for coconut milk instead. The switch was well worth it, as it is such a great soup!

This soup works great for meal prep if there is any left! It is easy to reheat and still tastes just as delicious.

This corn chowder is spicy! I really love the combo of corn and spice, so I made it plentiful in this chowder. If you aren't into spicy, I also give recommendations to lower that level.

Let's talk about corn. For this recipe, I love to use fresh sweet corn. In our area, it is in season from late July to August. I love fresh corn because that flavor is really hard to beat.

To prep the corn, shuck it. Meaning, peel back all the leaves and clean it up a bit. Then I like to stand it on end on my cutting board to cut it off. It is very simple and quick to do. Just work your way around the corn cob until it is all cut off.

If you want to make this recipe even easier, you can always use frozen corn. In that case, open up the bag and throw it in!!

You can use either vegetable stock or chicken stock for this recipe. I used vegetable stock as I am sticking with a vegetarian and vegan recipe, but just know chicken is an option.

I like to add coconut milk at the very end. This only needs to be heated, nothing more. If you want, evaporated milk or heavy cream is also an option.

How To Make The Vegetarian Chowder

I love my enameled cast iron dutch oven for soup making. It is thick and heavy. This means it holds and distributes heat well. Just what you need when making chowders and soups!

There are several ways to thicken a soup, but let me show you the easiest when you are working with starchy foods, like corn and potatoes.

Once the soup has cooked, in this case, just before you add in the coconut milk, take a few cups out and blend.

Then add the blended soup back into the soup. The released starches work to thicken your soup slightly.

Potato soups will really thicken this way, but with corn, it just thickens it a little, which is what I was looking for.

Variations For This Chowder.

There are a few ways you can mix up this chowder if you want. Let me share a few suggestions I can recommend.

I did not have potatoes in this recipe. I wanted it to cook quickly, but you can also add in some new or chop up red potatoes. It will take about 5-10 minutes longer to cook, but it is worth it if you love them!

I have my list of veggies I used in this recipe. Feel free to mix it up however you like it though! It is simple to add whatever you want. Just know your cooking times.

As noted above, you can also trade out evaporated milk or heavy cream for coconut milk.

The finished Spicy Corn and Veggie Chowder is simple in appearance. I topped with a little more cayenne and paprika. They added some thinly sliced green onions. That is it.

I love how simple this chowder is and how unassuming. Like it knows its value lies in the freshness and seasonality of its ingredients.

Carb Options to Serve with the Chowder

What is a great soup without bread or rolls to go with it? Well, still good, but bread makes everything better! Here are a few suggestions: 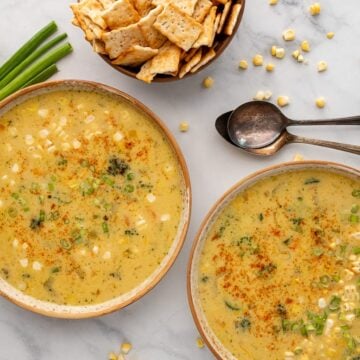