If you’re looking for a recipe that embodies the flavors of Mexico, this Easy Poblano Corn Chowder doesn’t disappoint. Charred Poblanos are a beautifully complex flavor. You won’t want to miss this chowder.

Why You’ll Love This Recipe

The flavor. If you have never had poblanos and corn together, this is the recipe to try it out on. It is delicious!

It takes a little time, but it is well worth it. This is the ultimate cozy soup for cold weather.

It is a vegetarian soup, but it is a hearty soup. I like my vegetarian meals to be filling like this!

I used canned corn for mine, but if you can find fresh, use this. Cut it from the cob and saute with the other ingredients below.

Next, you’ll heat the olive oil in a large, heavy-bottom pan over medium heat. Begin sauteing the onions and corn until they are starting to soften. This usually takes about 7-10 minutes.

You’ll want to add your garlic to your pot and continue sauteing for an additional three minutes. Then you’ll add in your peppers, your seasonings, and vegetable stock.

At this point, you’ll let the ingredients in the pot simmer for around 30 minutes or until your vegetables are soft. Then add your cilantro and remove the pot from the heat.

I like to liquefy my chowder with a blender or immersion blender and then add the evaporated milk to make the chowder smooth. You can substitute coconut milk if you don’t like evaporated milk or can’t have dairy.

We like to top our chowder with a variety of ingredients, including tortilla chips, avocado, cotija cheese, and even onions. This is where you can make the dish your own. Customize it however you like.

How to Roast Poblano Peppers

If you’ve never roasted poblano peppers, you may be wondering where to start. Roasting peppers can seem daunting, but it’s pretty easy.

Start by charring your peppers. I did this over an open flame, but you can broil it in your oven, or grill the peppers. Choose whatever cooking method you prefer.

The peppers will pop and make little noises when they are charring, don't be alarmed. It will take several minutes to get a good char on them.

Once they are ready, the skins should be able to be pulled off very easily. Then you can cut off the tops and remove the seeds. Once you’ve prepared the peppers, you can cut them in large chunks to prepare for sauteing

Can I add additional ingredients to my chowder?

You can. Potatoes are a common chowder ingredient. Cut them very small. You can add them in when you add the other veggies. Make sure they are cooked through before you move on to the next step in the recipe.

What substitutions can I make for the evaporated milk?

If you don’t like evaporated milk, you can use heavy cream, sour cream, or any other thick dairy or milk product. I suggest using coconut milk from the can for a vegan soup. You can use just the fat parts of the coconut milk that sit at the top of the can when you open it. It will provide a creamy, thick soup base.

Can I add meat for some extra protein?

You can. Chicken would be a great accompaniment to the chowder. Cube it really small and saute it with the vegetables until it’s cooked through. You could use other meats, such as seafood, as well. Just pick your favorite meat product and follow its cooking instructions. 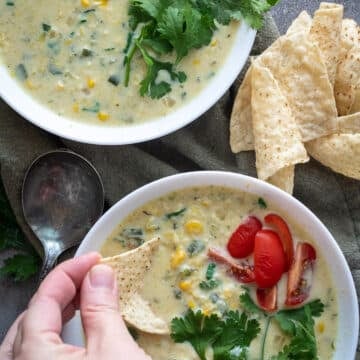 Amy- A Red Spatula
This soup is full of all the flavors you would expect from a soup with peppers and corn! One of my favorite combos.
5 from 1 vote
Print Recipe Pin Recipe
Prep Time 10 mins
Cook Time 40 mins
Total Time 50 mins
Course Soup
Cuisine Mexican
Servings 8 servings