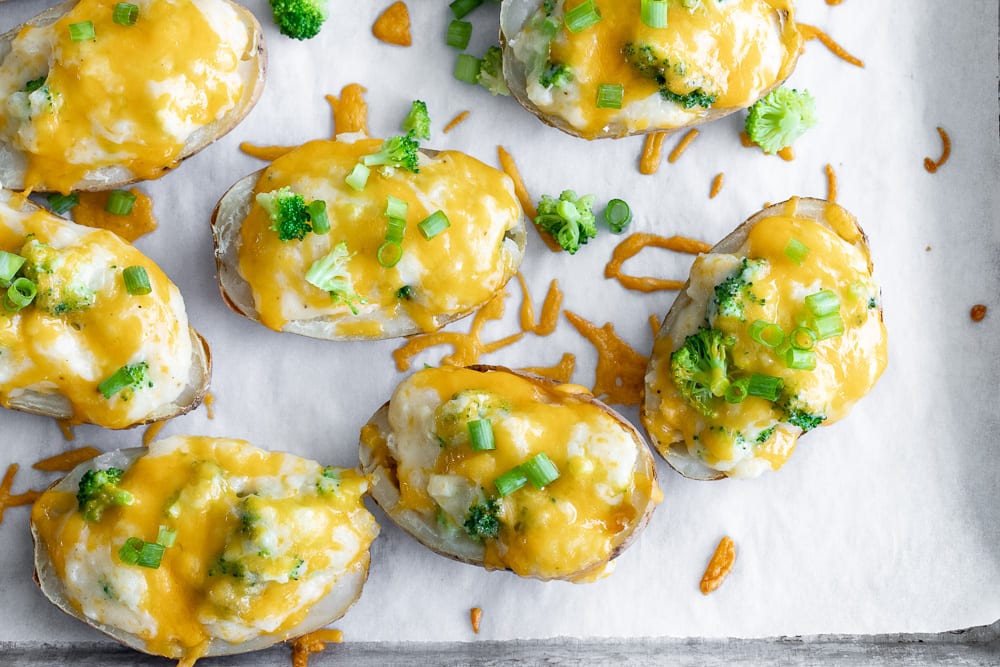 These twice baked potatoes are a slightly healthier version of the classic twice baked potato loaded with bacon….slightly. There is still plenty of cheese and butter, but the broccoli lightens it up just a bit! It is a little time consuming, but definitely worth the extra effort.

Give it a good poke with a fork. If there isn’t a place to release pressure, these babies will blow up in your oven. Trust me, you don’t want that mess! Bake until tender, but not mushy. I test by quickly squeezing the potatoes, when you squeeze, there should be a little give, but not too much!

When the potatoes are almost done, start getting the broccoli ready. I cut it into small florets. I mean, I like bigger chunks, but they aren’t the best in a twice baked potato.

I like to blanch my broccoli as it helps them maintain that bright beautiful color. To blanch any veggie, you add the chopped veggie to boiling water. Let it cook in the hot water about 2-3 minutes.

Immediately immerse in ice water. Once it has chilled, drain and set aside to dry.

Once your potatoes have cooked and cooled just slightly, cut in half.

I used a mildcheddar, but love a sharp as well. You can also use pepper jack, gruyere or any cheese of choice. Here is a great cheese grater. Mine is so old, but still works, so I won’t be getting rid of it anytime soon.

Now, heavy cream was my choice for many years, but I use a 2% milk now.

Add in your grated cheese.

Mix until you have a good thick consistency. It should look about like the photo below. After the mixing with the mixer I like to fold in the broccoli. I just don’t like for it to get all broken up by the mixer.

Spoon into shells. Now the filling is ready for the twice baked potatoes with broccoli, let’s fill!

Top with remaining cheese and bake until the cheese is melted.

Once it has baked, top with the remaining sliced green onions.

Obviously twice baked potatoes are generally a side dish, but we had 3 each and it was a great, light meal.

Looking for another healthy potato recipe? How about this potato gratin? Or a potato nest with fried egg?

The Best Summertime Sangria No Alcohol

Let me introduce you to The Best Summertime Sangria No Alcohol. While I love water…